This was a great race weekend.

Wrapped it up with my 6th time racing the Philly Tri Olympic distance.
.9mi swim, 24.8mi bike, 6.2mi run. In that order.

You can see the first two legs of the race from my eyes here (apologies if you're prone to motion sickness): 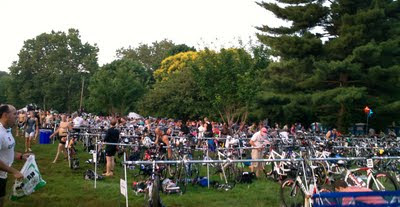 Took our time getting to the race.
Arrived and heard an immediate announcement: "Water temperature is 78.5 degrees. Wetsuits are not permitted."
Great for me. I don't wear a wetsuit. I still think they are cheating.

Kissed my wife goodbye and took a bus to the swim start.
Waited around for an hour. 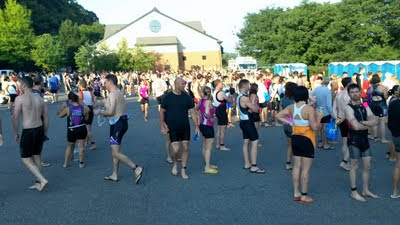 Brought a drop bag with some food and toilet paper.
Had another racer approach me and she asked, "I'm sorry. Can you spare a square?" I could.

Lined up for the start with the other red caps. 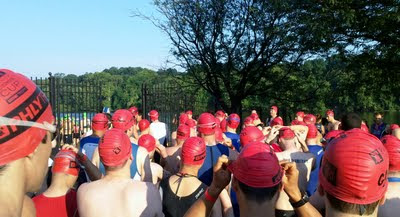 Jumped in the water. Assessed a minimal current assist in the Schuylkill River.

The horn sounded and we were off.

It was crowded and I think triathletes like to hit you for fun. I know I do.
As I mentioned,  my age group was wearing red caps. The previous wave had on green caps.

I swam a straight course to the final buoy. Two strokes per breath.
It went by fast. 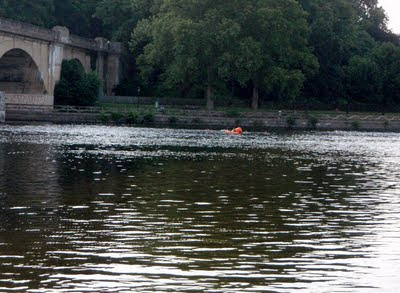 It wasn't long before we caught the green caps.
In fact, I exited the water in a sea of green caps. I didn't see any red.

I had a very good swim.
Not my best. 3 minutes slower than my best.
But that "Year of My Best Swim" featured a thunderstorm the night before the race and a resultant wicked current.

To the transition area. I struggled to put socks on my wet feet.
I used my favorite, thin running socks. Should've used my favorite triathlon socks.
Pulled on my bike jersey, helmet, and off I went out of transition. Running with my bike.

Hit the road for the bike and my legs felt great.
My bike felt great. 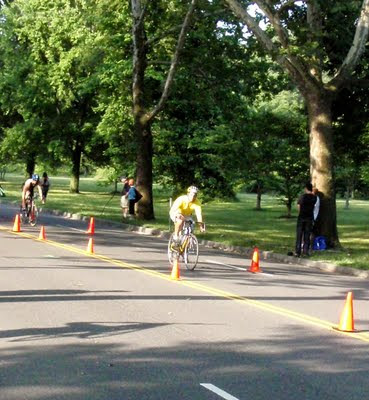 I will add here that I failed to pass a 68 year old racer on this loop. He better have won his age group.

To the run. My Juneathon Day 26 run.
Dropped off my bike and ran through the grassy beginning of the run course.
I felt great, handheld water bottle in hand. Full of PowerAde Zero

Took 2 miles to shake that out.
Oh, but a glorious 2 miles. In the shade. Thanks to the run course modifications this year.
The first half of the run, 3.1 miles, felt so good despite the early adversity.

Here I am, drafting. 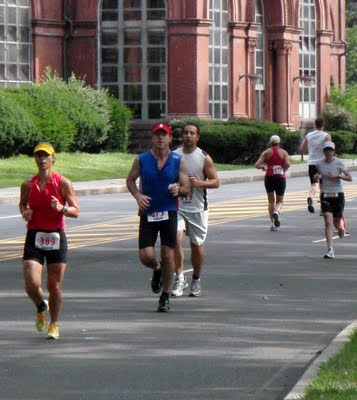 The second half of the run was outstanding.
I kept a 44 year old woman (our ages are Sharpied onto the back of our right calf) in sight for most of the run, as she had a good pace. She beat me, but.
But I had a strong final mile, and a strong finish.

I did not get a Personal Record (PR) this time around.
A few minutes slower than my PR from 2009.

And the difference was my run.
Because of those legs cramps, I ended up with a great swim, a nearly great bike (didn't break 20MPH pace like I expected) but a run that was 1min/mile slower than I needed.

Normally here, I'd say, "Next time."
I'm not sure there will be a Next Philly Tri.

I love the course. It is a first class race. Very well organized and orchestrated.
However, it is big. And the athletes and their equipment bring more to the table than I ever will.

It may be time to move on.
I'll make that decision in a few days.

For now, this weekend of 3 races (including the Kids Fun Run yesterday) went exactly how I hoped.
Posted by Mike of FailureToDetectSarcasm.com at 3:10 AM

Email ThisBlogThis!Share to TwitterShare to FacebookShare to Pinterest
Labels: ilike2triandstuff

I think one of the hardest things to do is move on from a race you have become so used to. I have a hard time with that; specifically Philly races!

Great job out there- I did not spectate although many of my friends did this race.

You sound a bit deflated. I know you'd like to PR at every race, but that's not very... (um, searching for word that's in your vocab) realistic? Nope. Not possible? Nope. It's statistically unlikely. There we go, that's about as positive a negative as I give!

You did very well! So many variables, the mix each year could yield anything. Moving on might be a great thing... it will allow you to train for & try new races, new adventures. Fun!

And that's for mentioning the 68 yr. old biker(you've been geezed!) & the 44 yr. old woman (you've been chicked! note I did NOT say geezed, too, since she's my age). It reminds me that people can perform on all levels regardless of age. You're a constant inspiration to me, in so many ways! See how you are?

Btw, I have read other June race reports that feature disappointed authors. I think Juneathon has its strengths, but maybe any June races suffer? I'm wondering about this...

i'm not sure if this made me excited or more scared for my oly distance in july. i'm having serious doubts over here!!! looked like a long wait treading water...geesh!

great job on the race. and if i ever get the courage to swim in the schykll, you have to do this race with me!