Over the past year, I have learned a few important lessons, all of which have stuck with me.
Here they are.

Lesson #1
Do Not Ignore the Symptoms of a Stroke

Exactly one year ago, I had a mini stroke, TIA, call it what you will.
And I nearly ignored it.

That is despite working in a hospital with this magnet on the fridge in our departmental kitchen: 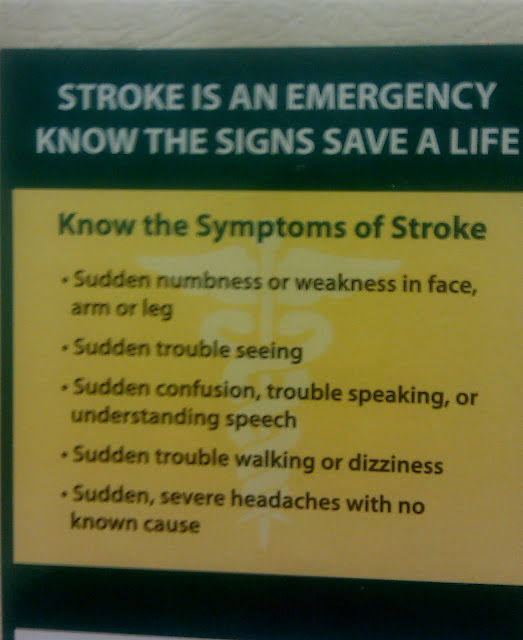 Oh and we have similar signs about every 20 feet as you walk down the hallways.

I even had the wherewithal to send a few cry-for-help instant messages.

And then I passed out. Nice!

I found that instant message log saved on my Desktop recently. I saw the file and said, "What in the hell is "HowToPassOutAtWork.html?" That answers that.

Yet despite these trademark signs of a stroke, I remained hardheaded. 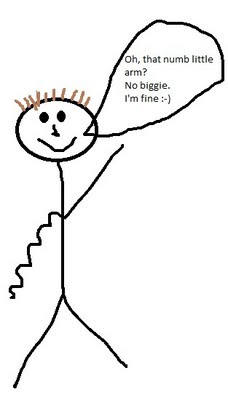 Thankfully, I was influenced enough to consider medical care and then my wife convinced me to go to the ER.
Worked out fine!

And while my mini stroke was caused by a blood clot in the brain which is pretty rare, it may be helpful to also recognize the common symptoms of blood clots in general.
Athletes can be prone, particularly the anecdote that post-marathon flights can lead to DVT's in your legs.

Lesson #2
Never Suggest You Need Swim Advice in the Shower. At the Gym. 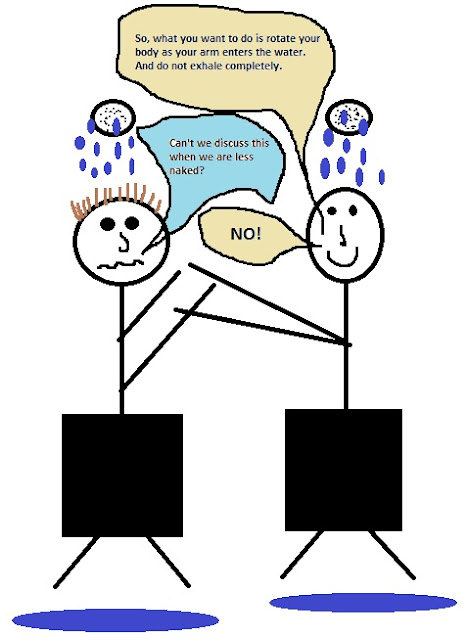 All I said was, "Yeah, really want to work on my speed. I seem to be stuck."
That was more than enough to invite the invasion of my personal space and modesty!

Funny thing is.
I applied the techniques that the naked man showed me. And I'm swimming faster than ever!

And last but not least.

Lesson #3
Do Not Talk to Strangers

Warnings about strangers should take root when you are a child.
Indeed, the Berenstain Bears taught me well.

But, as you grow, strangers become less scary.

Waiting for the end-of-the-night parade to start.

We find a nice parade watching spot.
The kids can sit on the curb.
My wife and I can stand next to/behind a trash/recycling can.

Fine, til a stranger walks up and stands behind the trashcan next to me.
At first I'm annoyed because I was raised to respect the 1 person per trashcan rule.

But I decided to make the most of it and joked with the guy.
"Hey, we may be standing behind a trashcan...but at least we can criticize people if they don't recycle!"
Oh, funny funny.

Stranger is from Reading. Relatively close to my home town.
Everyone is happy.

The kids demand $15/each light-up-in-the-dark balloons. 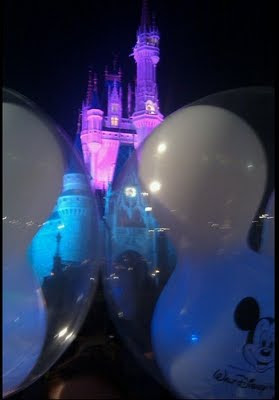 Sure! Anything for our beautiful kids!
Now, don't pop them!

The kids demand another hot pre-parade toy: Light-up bubble guns.
Sorry kids! Enjoy your balloons!
And for $30, they better last for the next 6 months.

Parade ends, we retire for the night.
Enjoy the rest of our great trip.

Back home a week later, and an email pops up on my phone.
It's a Facebook message.

I'm definitely confused when I read it. Where did this come from?

Hop on the computer and see the message is from some random guy named Sean.
Hmmmm. Weird.
Nearly brush it off.

Look closer at profile picture.
Hmmm, guy standing with Mickey Mouse. Yep. It's the guy from the parade trashcan.

Yeah and at no point did we exchange names. Not even first names.

As a sign of stalker respect, I shoot him a message back. "Yes the balloons survived the trip, thanks."

He shoots back a quick reply.

What an excellent memory!

And then he follows it up with the Oh-I'm-Not-Too-Stalkerly "Friend Request."
I've left it pending to this day.

Should I further reward him for his effort? And let him spy on my predictable, quiet life?

I've taken what I could out of this final lesson.
All he must have done is overheard my first name. Then searched for everyone in my home town named Mike.
Saw my profile pic (Disney-themed at the time of course) and knew he had his victim.

Did we really need to continue our strangerly conversation 1,000 miles and 1 week later?
Probably not.

So what I've learned is that we need to protect our identities while out in public, too.
And I've applied that to the kids, for example.
If possible, if I'm thinking, in public I'll use their nicknames.
Just a little barrier between the kids and a stranger if I'm calling them, "Scooby and Chickadee."

Probably sounds a little weird.
But, once you've been FaceSpooked, weird is the least of your worries.
Posted by Mike of FailureToDetectSarcasm.com at 9:10 PM

OK, that is a little disturbing. I feel like I put enough of myself out there on my blog, so that would really creep me out. Leave that request pending...

And I can't believe it has really been a year! Just look at all you've done. What a recovery. Thanks for the reminders. I'm glad your wife insisted on a trip to the ER.

Always nice when naked advice is worth it.

WOW that's stalker-crazy. i mean maybe he figured you could be facebook friends since you had made the "connection" being from the same area... still, a little too much effort on his part.

thanks for keeping the shower drawering PG. haha.