Last weekend I participated in The 4th Annual Stroehmann Back on My Feet 20in24 Relay Challenge, Lone Ranger Ultra Marathon, Midnight Madness Run & Pajama Loop event in Philadelphia.
In case you have already stopped reading out of exhaustion, specifically I did the Lone Ranger portion.

4th time I've done this race.
4th race report.
Same 8.4 mile loop. Run it as many times as you can in 24 hours.
Same pictures of the same stuff.
Oh boy, contain your excitement.

However, this past week, my recovery week, a new friend of mine commented that compared to her life, my life is a fairy tale.
So be it.

Once upon a time...
The queen of BOMF kingdom proclaimed that the knights in the land would compete in a series of games.

This 11th year of the 2nd millennium, 200 chosen knights would face the queen's ultimate challenge, the Lone Ranger.
Named after Sir Lone Ranger, himself once a valiant knight. Along with his steed, Silver. 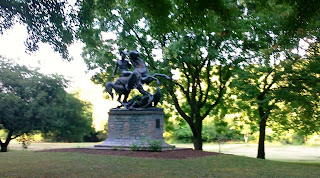 The knights would be arranged along the kingdom's most grueling circuit, the River Trail of Schuylkill, measuring a full 68 furlongs. There they would remain through sunrise, sunset and sunrise again.
The knights would battle along the circuit, both among themselves and among the local inhabitants, creatures and villains at every turn. He who survived would be awarded in gold. Or a check for $3,000.


A liberal kingdom, male and female knights alike were in competition, indistinguishable behind their armor.


In preparation for the arduous task, during the preceding evening, I had taken my son, young prince Goodles, to the village eatery, Chick-Fil-A. There we were entertained and erected a tent to enjoy the splendor of activities well into the evening. 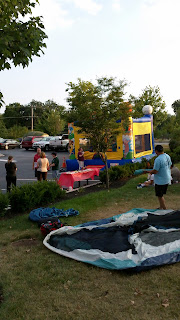 Alas, our choice of venue was leveraged against me. With close proximity to the village of Whelihan, my enemies had coordinated  a pre-competition attack.
Sir PJ of Whelihan and his collar-popped trolls provoked an auditory battle well after the moon had risen. When the son arose, the effects were clear.
I had not slept. With a sunset and sunrise still ahead, the true challenge of the day had been set.


I then traveled from the village of Downingtown to prove my worthiness to my family and earn my place among the knights of the kingdom.


In the hours before the events commenced, all knights were visited by the Doctor of Medicine. 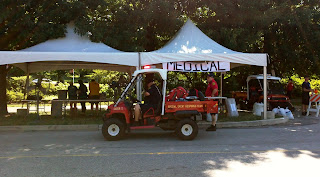 He would inspect the strength of our hearts, the sanity of our heads, and ensure that we were free from spells and enchantments. While his approval was necessary for competition, once the event began, any tricks we had would be at our disposal. And our enemies' disposal.


The knights gathered, outfitted in their village's finest armor. 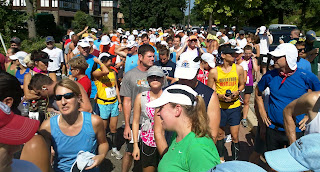 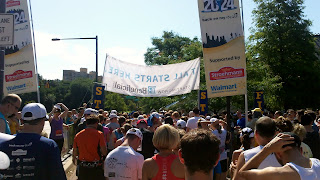 The games were launched by the singing of the Kingdom's anthem.


Cannons were fired and the competition was underway!


As with most knightly competitions, the ferocity of battle lie far ahead.
The kingdom's other challenges would surface first.


The initial challenge would loom over us for hours.
The golden dragon, rising in the east, hovering above. Waiting.


The queen had approved provisions along the circuit.
We also performed a degree of self-sufficiency.
A pacifist knight (rare in the kingdom), I solely possessed a canteen of artificially sweetened elixir swirling with electrolytic dust.


Despite the battle at hand, local peasants frolicked along the circuit, unaware of the hell that we knights were facing. After the first 68 furlongs, the dragon had risen to a peak in the sky.
Steam seeping from her nostrils.


We continued, unabated by the moat crossings. 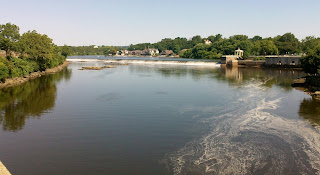 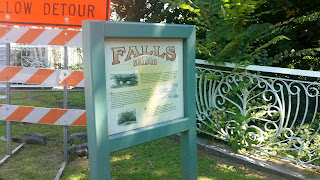 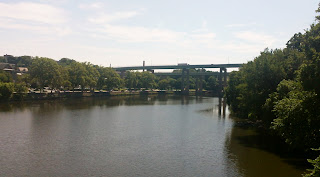 We focused on our task. Ignoring false idols. 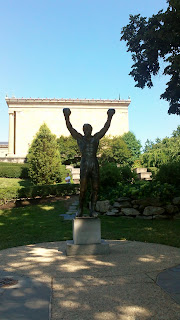 Escaping the gravitation of the pyramid's steps as they swept peasants skyward. 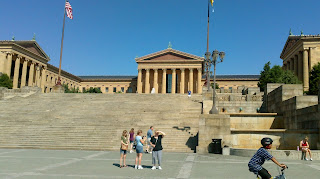 The dragon was the first to attack, sweeping her fire along both sides of the moat. 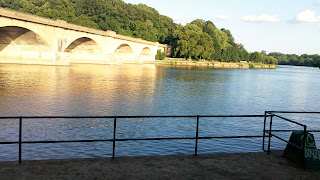 Our protection was thin but effective enough to counter the UVA and UVB attack.


Twice 'round the circuit and I had survived.


Vikings also plagued the circuit. Unprovoked, they set out in the moat. 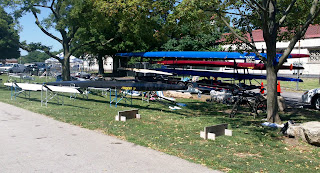 For the tiring knight, he would need to avoid the vikings as they moved their ships.

The 3rd round, my elixir however must have been prematurely removed from the fire. My stomach reacted in vain.
With each step, the weight of the armor grew until I was reduced to a stumble. 68 Long furlongs.


The dragon's attack continued, though as it waned, the other village creatures began to stir.


The 4th round I found hope.
Some knights were stymied. Felled by the dragon. Taken to the infirmary. Or worse. Back to their village.
Other knights forged ahead unabated. Angels floating in the sky. 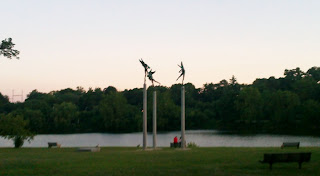 I remained on the circuit. My progress often delayed by mandatory visits to the Doctor of Medicine. He had to measure the fire in my ear. And the pressure of my blood. Each round, he permitted me to continue.


On the 5th round, like the cry of a damsel in distress, I was struck by a deafening sound.
My mind. It was failing.
Despite my strength, I had fallen victim to an enchantment. It had the telltale signs of Sir PJ of Whelihan. While I continued the march through the circuit, my eyes grew heavy.
I looked at my hand. There pulsating in the moonlight, a fresh branding on my forehand: RvW.


This could mean only one thing.
I stopped. I shouted (in a cellular manner) to my fair maiden at home in the village, minding our princess.
She confirmed. The curse of Rip van Winkle. With only one cure.


I returned to the grounds of the castle, the Hall of Lloyd.


Greeted by a pack of rabbits, I was welcomed to their burrow.
They were rapidly traversing the circuit as well. One at a time.
Relaying their message, "Sure Victory! Sure Victory!"
But for whom?


I promptly entered a deep sleep.
Ages passed. My hair and beard grew long. My feet, they blistered. My legs, swelled.


I was awakened by a communication from my maiden. A message of text.
"12 hours in. Be safe. Fight on!"


I sprung to my feet. Guzzled my elixir. Affixed a candle to my forehead.
340 furlongs behind me (you may know that as 42 of your miles), I reentered the competition.


Nighttime along the circuit, all sorts of treachery abounded.
A knight was attacked by an ogre.


The queen ordered additional protection. Members of the royal guard spread out on the course.
Their carriages branded. PPD.


Ye there was also joviality.
Hundreds of illuminated peasants, proceeding opposite our course along the circuit.
Crying chants of encouragement.
Local peasants exploding mortars, with brilliant streaks of light in the sky. 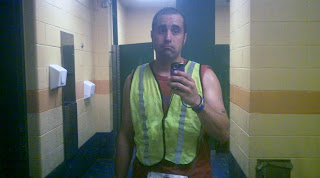 My spirit was still strong.


The 7th round, I encountered a ladybug fairy. She was swept along by a tornado.
I planted myself in their midst and rode the tornado along the circuit, pausing to acknowledge a fallen Warrior along Mile 54. "Warriorman" Rick. 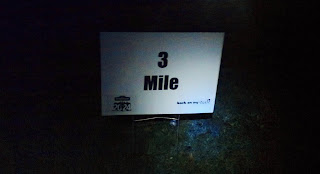 The 8th round, my luck had once again been challenged.
Walking the east side of the moat, through the enchanted forest. 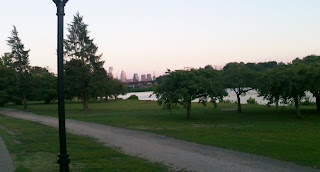 I was quietly approached by a witch.
She walked alongside me and started to converse.


She attempted to disguise her evil. Her aura however was charcoal. Black. Decay.
Her attention consumed within gazes at her mirror, I escaped.


I would however need assistance.
Assistance appeared in the form of a fleet footed elf just ahead on the circuit.
We discussed the witch and her weapon. Deception. We pushed ahead.


Entering the 9th round, I maintained course with the elf. He personally enduring his 13th round. Our advancement was undeterred.


The sun began to rise again. A new day born.
The end within sight. Victory uncertain. But victory unnecessary.
Survival in the end. That was the queen's true test.


While a knight would be crowned the victor, he was but one small story of success in battle.


The 10th round. More enchantments. The witch had uttered an incantation.
34 furlongs into this 10th and final round of the circuit, my left knee was damaged within my armor. No visible marks, my leg grew stiff.


The elf and I parted ways and I limped back to the castle once again under the eye of the golden dragon. My progress slow. Furlong after agonizing furlong.
Tears filled my helmet. However, the Viking land was within view. 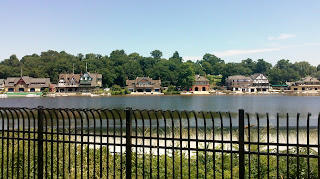 With but 13 minutes remaining in the competition, 84 miles later, I was welcomed back to the Hall of Lloyd.


My left leg now immobile, I gathered my gear and as before communicated with my fair maiden. She arrived to bring me back to the village.


We returned to our home, prince and princess in tow.
I climbed into the well and let the cold water heal my legs.
I climbed into bed and let sleep, unenchanted sleep, heal my mind.


And when I awoke, the tale of the prior sunrises.
It was not a dream.


For All of the knights. Who had competed. Who had celebrated. Not to seek the award of gold, but to return it to the most vulnerable peasants. We had grown and We will live Happily Ever After. 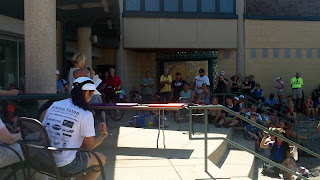 The End
Posted by Mike of FailureToDetectSarcasm.com at 2:10 PM

Email ThisBlogThis!Share to TwitterShare to FacebookShare to Pinterest
Labels: mylifeisnotafairytale

You did it...again!! Congrats Mike! I do hope the knee is feeling a bit better today. What an experience that all sounds like...wow.

Outstanding Sir Knight!! May your kingdom long reign! You are a champion of good and write! An example to all that the tale doesn't compose itself!

Best recap ever. If I've said that before, it's now replaces with this one. Long live King Mike!!

And really loved the mile 54 bit.

Well, that was quite the flight-of-fancy race report. I'm sure I didn't understand parts of it, but I think I did get that you did 84 miles? WOW. That's more than I ran for the entire month of Juneathon. Super impressive. Sound the trumpets! Glad you kept out of the med tent, besides those pesky check-ups, I mean.

P.S. I'll forgive you this once, but if you ever post another shot taken in a public men's room, I will cry foul. Somehow, it's kinda skanky... even tho you're one of the least skanky guys I know :-)

And I'll take a men's room photo over no photo.

You are incredible. And this race deserved a fairytale telling. It is incredibe. 84 miles. Wow!

Hope the leg is feeling better and that you are now well-rested. Sorry this is so late, but I actually managed to unplug (almost) competely for the (long in Utah) weekend.

That was great. Congrats again on a great run.
If only life were a fairy tale....

So... are you going to do Janathon 2012? Cuz that would mean you'll start blogging again, right?

Hope you're well. Was thinking of you & Meg today, cuz it's a great day for a run! But mostly thought of you cuz I bought a stack of CDs at the library "book" sale. Dollar each. Stuff unknown to me: Barenaked Ladies, Cranberries, Early November, Stone Temple Pilots, etc. Having a blast learning the words. There's some frightful singing going on in my car these days... just sayin' Hope you had an awesome summer!

Haven't seen a post from you in a long time. Hope all is well with you and the family.