Afraid of the Dark

Got to bed last night shortly before 11PM just in time to get a call from my wife that my daughter, Honeybunny, checked out OK at the ER. Nice shiner though!

I was hesitant to set the alarm clock for 1:45AM but it was gonna work out OK.
Discharge instructions included waking her every few hours, like you're supposed to do in the event of a concussion.
Fine.

I had my running gear ready in the bedroom.
Handheld water bottle, reflective vest and headlamps ready downstairs.

I decided I would run with two headlamps for improved visibility.
One on my head.
And holding one in my hand. I set the handheld to BLINK mode.

Woke on schedule. Felt like hell after not quite 3 hours of sleep. No surprise there.
Got out the door just after 2AM and hit the road.

The intent of this run was to prove to myself that I could run along the highway at a horrible hour like 2AM without scaring myself to death or getting hit by a car.
In either case, I did not have a plan if one of those events occurred.

I ran many times at night during the winter and the most important safety aspect remained true last night:
Drivers give night runners respect, often crossing over the center line to provide enough safe running room.
Cars are so surprised to see you out there glowing and running along the side of the road.

I ran against traffic.
When cars approached from either direction, I squeezed against the edge of the shoulder and the grass.
When cars weren't around, I ran on the inside of the white line. 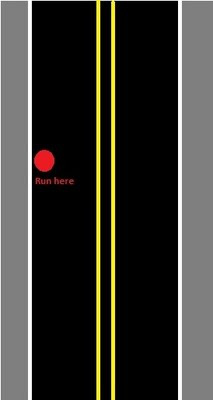 Staying on the main part of the road rather than in the shoulder the entire time protects your body.
The grade of the shoulder can prematurely wear down your muscles and joints.
It is easy to run in this manner at night when you can see an approaching car hundreds of yards away.


There are several issues with running at this time of night:
Overall, that's not bad.

I finished the run in just about 1hr 15min.
The outdoor temperature was a relatively warm 72 degrees (F). That left me soaked in sweat, with an empty water bottle, just as I finished the run.
This time of year, I would expect/prefer 50 degrees at night.

This morning's early run wasn't too long but it gave me the confidence boost I need to begin a long run while the rest of the world sleeps. That's what I needed.
Posted by Mike of FailureToDetectSarcasm.com at 7:29 PM

Kudos. I refuse to run in the dark. I would literally, I am sure, scare myself to death. Then I would be the roadkill.

i like running in the early morning, but not quite this early. less traffic, quiet... it's quite nice. i'm always more worried about scary people than bad drivers for some reason... obviously i've had more close-calls with bad drivers than kidnappers.

I'm liking the new title! :)
Running at 2am along the highway would scare the crap out of me...yikes!
Glad the little one is ok.

Loving the new blog! And why DO people like to scream at runners? I can't even imagine it happening in the dead of night. I don't know how you do it. I start to panic if it gets dark enough that drivers start turing on their headlights.

I wondered what happened to your girl when I saw your updates on FB. Glad it wasn't too serious and she is OK.

Nice run! I have yet to run in the dark, I'm a scaredy cat.

I am occasionally finishing my runs in the dark, since I'm a procrastinator getting out there some days.

The difference is that there are no cars & any animals I come across in the road are alive & surprised to see me! Much creepier than roadkill or slowing cars :-) I know that coyotes & bears will bolt. But I hate to appear that I'm game for chasing them, HA!

Be careful out there, you. Humanly populated areas can be so dangerous!